Brandon Traino has added to his legacy at iRacing’s Indianapolis Motor Speedway.

The three-time official iRacing Indianapolis 500 race winner has taken the checkered flag in the ISOWC 500.

Traino beat his teammate Christopher Demeritt by half a second to take the victory.

“I think my biggest competition was my teammate Chris,” said Traino, who drives for ART w/ Team I5G. “We spent a lot of time draft testing together and you learn each other’s tendencies. Luckily I caught the lapped traffic at the right time and it allowed me to gap him for the last two laps and just snaking to break the draft … Ultimately I held him off.”

Demeritt said he felt Traino would need to have bad luck while dealing with the traffic to get around him.

“I kind of knew by the middle of the race that Traino was just driving that much better than me and that he could get the runs off the corner better than I could,” said Demeritt. “I was just trying to stay more with him and not hit the wall and throw away a P2 than anything else.

“I’m super happy for Traino. I know he works super hard for us and he’s just so good every time we go to Indy.”

The ISOWC 500 had just one caution over the course of 200 laps. That incident came on Lap 3 when José I. Soria pushed up the track in Turn 1 into Adam Crane. The two cars hooked together for the remainder of the corner, sliding them into the SAFER barrier. Both cars bounced off the wall before straightening out in the short chute. Crane and Soria finished 32nd and 33rd respectively.

Early on, swap drafting became a focal point at the front of the field. Traino and ISOWC champion Valtteri Alander traded the race lead for several laps during the first stint, trying to break away from the pack.

Kraus broke the pattern on Lap 16. As Traino and Alander were going for the draft swap again down the frontstretch, the Team Talent driver made it three-wide heading into Turn 1. Traino backed off, allowing Kraus and Alander to battle through the corner. Alander got the better run on corner exit after Kraus bobbled along the inside of the track, giving the KOVA driver the lead heading down the backstretch.

Traino responded with his own run down the straightaway, pulling alongside Kraus by the middle of the backstretch. He built up a run up to six miles per hour faster than Alander heading into Turn 3. Traino was clear by the middle of the corner to retake the lead and restart the swap draft with Alander.

Meanwhile, some drivers were having single-car incidents. On Lap 21, VRS Satellite Racing driver Sai Andra was running in 21st position when he slammed into the SAFER barrier in Turn 1. He tapped the wall several times with his right-side tires through the short chute before grinding against it through the next corner. As he tried to pull himself off the wall, he bounced back into it hard, smashing his right-front axle and sending him sliding along the edge of the outside wall. No caution was triggered for the crash.

Andra was one of eight drivers to finish double-digit laps down.

On Lap 31, the first pit stop window began. Traino, Alander and Demeritt left Kraus on his own on the track as they dived their way into the pits. Alander had a longer pit stop and spun his tires out of the pit box, allowing Demeritt to pass him by the commitment cone. Demeritt and Traino broke away from Alander quickly, gaining more than 10 car lengths from the KOVA driver on the outlap by Turn 3.

Traino and Demeritt continued to swap-draft away from the pack for much of the rest of the race, only stopping their pattern when they reached lapped traffic.

When asked post-race about the advantages of the car, Traino said its ability to swap for positions without burning the tires was a strength.

“We’ve spent a lot of time focusing on mechanical grip and relying on aero and I think that’s been our key,” said Traino. “I know people can’t do what we did, so I know it’s really special for the guys putting the car together every time we come to the 500.”

The two drivers broke apart on Lap 126 while lapping Issac Morris. Demeritt drove to the top of the track in Turn 1, trying to get clean air. He lost momentum coming out of the corner, costing him three car lengths. Traino then latched onto the draft of Oscar Mangan, Jacob Oster and Andreas Eik. The ART w/ Team I5G driver ran a speed of more than 230 MPH down the frontstretch, passing both Oster and Eik by Turn 1.

Traino used the opportunity to swap draft with Mangan to pull away from Demeritt by several seconds.

That gap dissipated after a mistake in the pits on Lap 150. Traino overshot his stall, forcing him to back up. Demeritt took advantage, immediately taking away the position on the race off pit road. The two swapped positions for several laps before Traino was able to defend on Lap 155, picking up the draft of Spark | Last Lap Motorsports driver Mickaël Cado.

As Traino and Demeritt tried to break away, some were trying a different strategy. Neto attempted to go longer on his stints in the pack, allowing him to pit with 34 laps to go. When Traino and Demeritt came in a few laps later, Neto cycled in front of them by half a track.

The raw pace of Traino and Demeritt came out after that cycle. Both drivers reeled in Neto by a second a lap, with Neto running times as in the 42-second bracket. By Lap 184, Traino was able to make the pass on Neto for the net race lead.

“Unfortunately it didn’t end the way I wanted,” said Neto. “I was not expecting to have such a long green-flag run … I just started full fuel-saving mode with three stints to go. If I had started to save a bit earlier, I could have went longer for one or two laps and that could have allowed me to don’t have to save fuel in the last stint and we could have been in the fight for the win.”

Traino started to snake to the bottom of the track with about 12 laps to go, attempting to break the draft of Demeritt. While Demeritt got side-by-side several times with Traino by going to the outside line, he could not fully clear him. With five laps to go, Traino was able to stay single-file by reeling in the draft of Alexander Walton.

“Honestly, I knew I had a good car for this race, but (Indy) 500s are never guaranteed, so to win three official ones and this one is pretty special,” said Traino.

This report was written by Justin Prince.

After what has been a season full of thrills and emotional finishes, the ISOWC is ready to close out the campaign by going to iRacing’s virtual Indianapolis Motor Speedway.

The ISOWC has a new champion. After Oscar Mangan crashed coming out of Turn 1 on Lap 21, Valtteri Alander clinched the 2021 season title after scoring his third victory of the 2021 ISOWC season at iRacing’s virtual Road America. 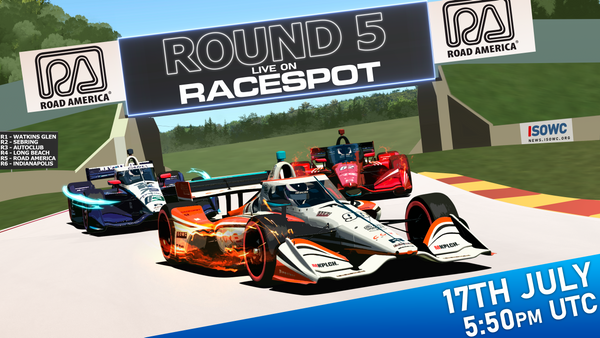 Weeks after an incident-filled race in Long Beach, Calif., ISOWC is ready to head to America's National Park of Speed for its second-last race of the 2021 campaign.